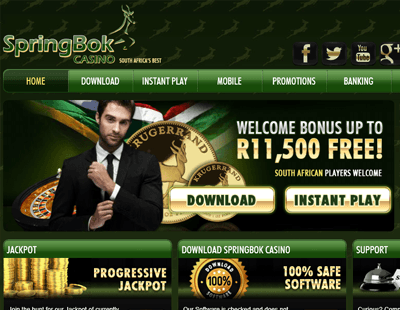 I remember once sitting in London pub, miserable and thousands of kilometers from home, watching the locals cheer their own side in a match against South Africa.

Suddenly a group of guys at the table next to me raised their beers to the screen and yelled in the sweetest South African accents ever heard: "Go Boks!"

That feeling of 'home away from home' that swept over me at that very moment is the one you get when you step through the virtual doors at Springbok Casino - the online casino which strives to be "South Africa's best" and sets out to do so in more ways than one.

You can't ignore the qualities of a site that calls you 'China' and promises to bring you 'everything that's lekker about South Africa' and which will 'make you go: Jislaaik - that's cool'.

But besides the obvious advantages of playing at a site that is geared mainly towards South African players (how cool to see bonus amounts quoted in Rands!), there are other reasons to play at the site.

One of the most prominent is the sum of the progressive jackpot total which has reached staggering levels. In fact it has passed the R28 million mark and is steadily climbing to the R30 million milestone.

Let's start off by saying that there are plenty of progressive jackpot games at Springbok Casino, and not all of them are slots.

The total of all these games is nearly R30 million, with some games carrying jackpots worth more than others.

The biggest jackpot at stake is on the progressive online slot game, Aztec's Millions with a whopping R11,500,000 up for grabs. I can think of A LOT of things that I could do with that amount of cash!

If don't mind settling for 'second best', then try out Spirit of the Inca slot with its R6.1 million jackpot or Jackpot Piñatas with R5.1 million.

Other Progressive Games at Springbok Casino

Other slot games that carry big jackpot bonuses at Springbok Casino are Shopping Spree II and Cleopatra Gold, both with jackpots of R1.5 million.

But if you're looking for a change of pace and want to switch to card and table game, try their progressives as well.

If you're dying for something local and lekker and want to try your luck on the Springbok Casino progressive jackpots, then it's time that you opened an account at Springbok Casino and make your first deposit.

The special offer is valid over your first three deposits as follows: