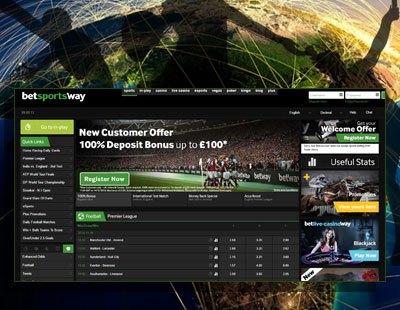 Rise of Sports Betting in Africa - Betway Leading the Way

Africans are crazy about sports, especially football. Sports events are not only a source of great entertainment to African fans, but also an opportunity to win some money by placing sports bets. Many smart Africans make a lot of money by betting on sports and online sportsbooks such as Betway make it easy for them.

Although as much as 40% of the African population is below poverty line, it is also emerging as one of the most lucrative sports betting markets in the world.

Popularity of Sports Betting in Africa

Operators of sports betting businesses in Europe and the US have already realized this fact and are expanding quickly into the African market. This has led to the rising popularity of online sportsbooks such as Betway, which is managed by a Malta-based company called Betway Limited.

Sports betting at Betway is safe and secure as it operates under a valid license granted by the UK Gambling Commission.

Betway is a multi-currency site that accepts payments through Africa friendly banking methods such as PaySafeCard, Visa, MasterCard, PayPal, Skrill, and Neteller. It is safe and secure as it bears the eCOGRA Safe and Fair seal and is associated with ESSA and IBAS.

Africa is home to a number of sports betting advocates who say that it creates job opportunities to a large number of young Africans while enabling bettors to make some quick money, generating tax revenue for the government, and contributing to the economic growth of several African countries.

Reasons for the Rise of Sports Betting in Africa

There are a number of reasons why Africans in larger numbers are spending large amounts of money on sports betting. Offshore operators of sports betting services are getting attracted to Africa in large numbers for very good reasons.

Here are some of those reasons:

More than 200 million people in Africa are in the age group of 15 to 24 and a large number of them do not have jobs. Certain African countries have an unemployment rates that are as high as 25%. In addition, the population of Africa is believed to become twice as big by 2050 and the continent will have the world's largest youth population. The sports betting industry gives these young people an opportunity to earn as they enjoy their favorite sports events.

Africans are crazy about sports. Although football has the largest number of fans, cricket also has its fair share of followers. In Zimbabwe, South Africa, and Kenya, rugby also enjoys a great deal of popularity. European football leagues in general and the Spanish, English, Italian, and French leagues in particular have African fans in millions.

Africans also love placing bets on sports such as hockey, basketball, tennis, car, boxing, horse races, motorcycle racing, and other sports. They are especially enthusiastic about placing bets on outcomes of matches, number of goals, players who score the most, and so on. It is this African craze for sports that makes its sports betting industry one of the most lucrative in the world.

At the same time, certain Muslim-majority African countries have imposed a blanket ban on sports betting and placing bets on sports is definitely illegal there. Gambling is also illegal in Gambia, which has banned all forms of gambling including sports betting, casinos, and lotteries.

Young South African adults are excited about how they can place bets on their mobile phones using Africa facing online sports sites such as Betway. In fact, Betway is one of the most popular African online sports betting sites. Even residents of remote villages such as Musango in East Africa, for example, can place sports bets almost for free and win huge amounts of cash. They can place small bets of 100 shillings or $1 and win amounts as high as 50,000 shillings or $525. They can use their winnings to pay bills or school fees.

If you are a resident of Africa, you only have to check out the gambling laws in your country and set up an account at Betway Africa to start placing bets on your favorite sports events.