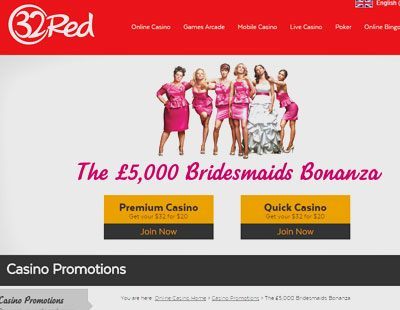 32Red.com has given a new twist to the Battle of the Sexes in its new Bridesmaids slot promotion currently running at the casino site.

If your name came up in a lucky draw, would you claim an Apple iPhone or a spa package? Would you battle your better half for a Bose mini bluetooth speaker or relent and allow her to choose the Tiffany jewelry voucher?

If these type of prizes appeal to you, then it's time you visited 32Red.com today to enter the new Bridesmaids promotion.

The competition was launched today to honor Microgaming's fantastic new slot game, based on the 2011 blockbuster of the same name.

Even if you don't win one of many prizes up for grabs, you will still have lots of fun playing one of Microgaming's most exciting games to date, and definitely one of the highlights of 2015.

Casino Prizes You Can Win

All you really have to do to enter the Bridesmaids slots promotion at 32Red Casino is start playing Microgaming's newly released title and have your name entered the multiple draws this month.

Wager just £40 on the game to earn one ticket into the draw. Tickets are unlimited, and you are invited to play as much as possible to increase your chances of winning.

The promotion will run until September 3rd and up until that time, three draws will take place - on August 13th, 20th and 27th.

Two weekly cash draws will be held - where one player will receive a £400 credit and the other a £200 prize.

But the big prize draw takes place on September 3rd where His & Her packages are up for grabs.

If your name comes up in one of the five draws held on September 3rd, you'll have to decide between a Him or Her prize - but here is where the fun begins.

Put yourself in line to win one of the following packages: