Turkson Bookmaker Favourite to be Next Pope 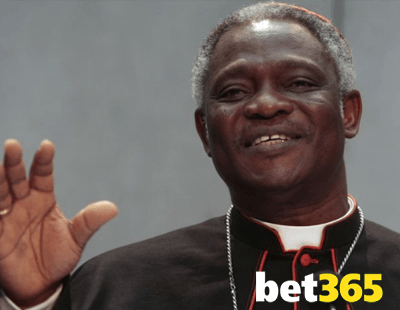 Hopes are high that the next pope to replace Benedict XVI will be from Africa. Should any of the favourites be nominated to fill Benedict's shoes, he will become the first black man in history to be a Pope.

At present, Cardinal Peter Turkson, born in Ghana, is papal frontrunner, and bookmakers such as Bet365 have made him their favourite with odds of 9/4.

Many agree that it would make sense for an African to become pope, based on the fact that the Catholic religion is growing fastest in Africa (as well as Asia). The Catholic Church is part of many fabrics of African societies, including schools, health clinics and community centers, and the continent would be proud to put a representative in the Vatican.

The number of practicing Catholics in Europe, where the pope traditionally hails from, is declining at an alarming rate, yet in Africa, believing Catholics rose from 55 million in 1978 to a staggering 150 million. The number of men training to be priests in Africa has risen by 14% compared to a 10% drop in America and Europe.

Another African in the running, albeit with longer odds at Bet365 bookmaker, is Francis Arinze from Nigeria. Born in 1932, Arinze converted from traditional African religion to Catholicism at the age of 9.

Arinze, considered one of the current pope's principal advisors, appears on the shortlist of men to succeed Pope Benedict XVI, and is currently 5th on Bet365' list of favourites with odds of 10/1.

Who Will Succeed Benedict XVI?

While this will be the first time in history that a pope will be a black man if either Cardinal Turkson or Arinze succeed Benedict XVI, there have been previous popes in history from the African continent.

For example, St. Miltiades, who served for two years between July 311 and January 314 AD, came from Africa, and was the first pope after the end of the persecution of Christians through the Edict of Milan. St. Galasius, who served for four years from 492 to 496 was also born in Africa.

Bet365 Odds on Next Pope

Turkson next Pope betting favourite odds are being offered at the sportsbook site, Bet365, along with many other pontiff hopefuls: