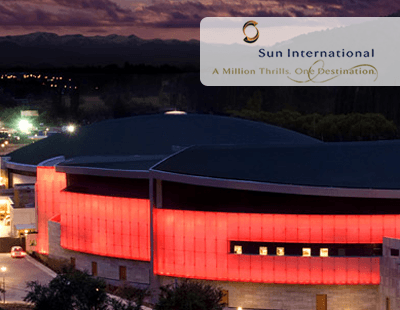 South African hotel and gaming group, Sun International has released their report for the third quarter of last year which has revealed mixed results in their different areas of business. The results have shown a reduced growth in the casino revenues, with strong results for their hotel and resort division.

The group reported a 10 percent increase in total net revenue to R2.55 billion year-on-year and a twelve percent growth in earnings before interest, tax, depreciation and amortization (ebidta) to R730 million year-on-year.

Although Sun International casino revenues rose 3 percent compared to last year, because of a drop in revenues at its Monticello operation in Chile - reportedly due to the introduction of anti-smoking laws on March 1, this year - its March revenues were 18 percent below those posted in March 2012

Although the smoking ban significantly reduced the revenue for the company, Sun International is optimistic saying that “past precedent in countries where smoking has been banned is that revenues recover within a 12-24 month period.”

The company experienced low revenue growth at Grand West, as well as Sibaya and Carnival City. The Carousel and Morula reported revenue that was down 6 percent and 12 percent from the same period last year with Sun International citing the roll-out of slots and electronic bingo sites around Pretoria as the reason for the declined revenues.

The Boardwalk saw an increase of 12 percent in revenue which can be attributed to “the opening of the new hotel and the completion of all construction activities in the prior quarter.”

The hotel and resort division of Sun International reported significant growth in the quarter which they attributed partially to Easter “which fell in March this year and April last year.”

Strong growth was seen at Federal Palace, Sun City, Table Bay, Wild Coast and Zambia, which grew 41 percent, 17 percent, 25 percent, 29 percent and 23 percent respectively, as well as the new Maslow Hotel. The Maslow Hotel has been rated as the number two hotel in Sandton, North of Johannesburg by TripAdvisor. The ebidta margin increased by 0.6 percent to 28.6 percent due to an increase in room revenue.

According to De We Schutte, Avior Research hotels and gaming analyst, the revenue growth of Sun International has been steady despite the negative effects of certain external factors, such as the increase in gambling tax in the Western Cape.