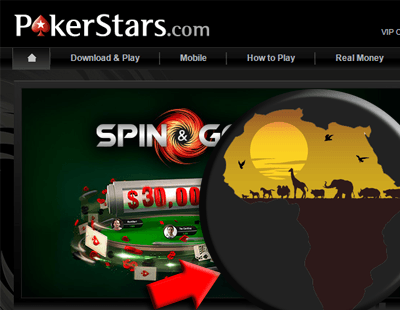 Suddenly and without warning, PokerStars and Full Tilt withdrew from a number of gray markets, primarily in Africa and the Middle East. It is unclear precisely why the companies decided to withdraw from these markets at this time, but their players will no longer have access to any real money games.

The withdrawal from their gray markets came with the following explanation from PokerStars: "Our management team regularly reviews our operation along with 3rd party professionals to assess the business risk and opportunities for our brand on a market-by-market basis. Following our most recent review, it was determined that we would no longer offer real money games in your country."

The account balances of those players from affected countries will be preserved and players will be able to withdraw their funds. In addition, all tournament tickets and unused T$ or T€ will "automatically be converted into their equivalent cash value upon entering the Cashier". Players will also be able to spend their FPP (Frequent Player Points).

There is no official list of countries that have been affected, although based on the comments posted on Player Forums, the following African countries have been affected: Egypt, Kenya, Mozambique, Nigeria, Rwanda, Senegal, Sudan, Tanzania and Zimbabwe.

It is unclear why PokerStars has decided to withdraw from these markets at this time, particularly in the light of their recent comments that they would continue operating in "all current markets."

PokerStars in Africa has been operating as a gray market. This means that the country does not have a specific prohibition against online poker, but also does not have a licensing or regulatory body governing the game.

There is some speculation that the reason for their withdrawal is in reaction to the new UK Gambling (Licensing and Advertising) Act. The new laws will require operators who have significant presence in gray markets to legally justify their presence there if they want licensing in the UK.

It is probable that these operations constituted less than the 3 percent of operations threshold required in the UK for these companies; however Amaya may be aiming to improve their global regulatory reputation leading up to a prospective return to the US market.