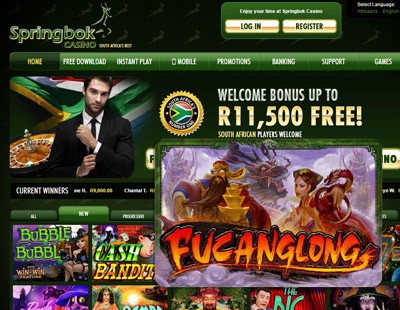 After an exciting 2016, players at the popular Springbok Casino are gearing up to enjoy the upcoming year. The online casino offered regular new games each month from Realtime Gaming. With the old year almost out, Springbok Casino has announced the first new game of 2017.

Springbok Casino players can look forward to another year of entertaining online slot games, starting with Fucanglong, a new animated video slot game. The game is set to be launched on January 11th, 2017, and will be the first of regular 2017 game releases.

The Chinese-themed slot game, Fucanglong, is based on a mythological dragon and his treasure. Fucanglong guards the treasure deep in the underworld, keeping it safe from others. Legend notes that when volcanoes erupt, it is simply Fucanglong jumping up from the underworld in order to give a report to the heavens.

The new video slot game is an all ways pays game, which means that payouts occur on wins from both left to right, and from right to left. The game comes with special features including the Scattered Dragon Mountains free games feature. When the Scattered Dragon Mountain symbols appear on the reels, free games are triggered. The games come with multipliers that increase up to a possible 8x.

During the free games, the Scattered Dragon Pearls can be found on the reels. These scatter symbols reveal a win number. If free games wins do not reach as high as the special Pearl number, another special feature, the Fucanglong Feature is triggered. This gives players extra free games, which can be played until the winning total reaches to at least the same value as the Pear had shown. Each time an extra game is played, the Pearl value gets bigger, increasing the length of this special feature.

The Springbok Casino Manager, Daniel van Wyk, commented on the new slots game: "Of course, while in western mythology dragons are fierce and destructive creatures that kidnap maidens, in China they are spiritual and cultural symbols that represent prosperity and good luck. This January, not only do we have the western New Year but the Chinese New Year also, we decided that Funanglong would be the perfect way to wish all out customers happiness and prosperity for 2017."