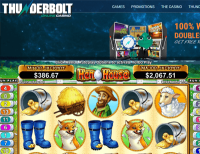 A South African player has had an exciting winning streak at Thunderbolt Casino. She won over R100,000 when playing the Hen House slot game.

The lucky winner from the Eastern Cape, Chere S. followed the advice of a friend and signed up to play at Thunderbolt Casino just last month. The new Thunderbolt player had not been at the casino for long when she began to win on the popular slot game Hen House.

Chere won a total amount of R106,069. She had played in online casinos in the past, but had not spun the reels in some time. While she does describe herself as somewhat lucky, she has never been this lucky with a win before.

The Thunderbolt winner will be using her winnings to add on to her home. She was asked if she had advice for those who play in online casinos, and noted: "When you win big, cash out!" Chere said she is glad that she followed her own advice to cash out once she had won big.

Alisa, the Thunderbolt Casino Manager, commented on the win: "We're excited for Chere, and amazed by her fantastic luck! She hadn't been playing here very long before she had the kind of casino night that other players dream of!"

The winner had thought to let her husband continue sleeping after her lucky streak. However, she decided that she couldn't keep the good news in, and woke him to tell him. "He wasn't too pleased about having his sleep interrupted but he went from grouchy to excited pretty quickly when he realised why I woke him!" she said.

Thunderbolt Casino opened its virtual doors in 2014. In 2015, the casino was acquired by the Springbok Group. At Thunderbolt Casino, you can play via the download version on your PC, the instant play version using a browser, or the mobile casino version. The casino offers a choice of playing in either English or Afrikaans, and has responsive customer service representatives. The casino offers play in Rands, which means players do not have to process their funds through any form of currency conversion.

New players at Thunderbolt Casino are offered a Welcome Bonus worth up to R10,000. The casino offers a large number of games from Realtime Gaming (RTG), and is licensed and registered in Curacao.