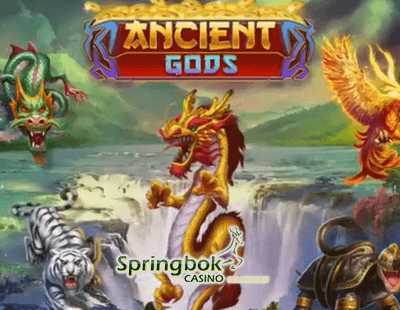 Realtime Gaming (RTG) has released a large number of slot games in the first half of 2018. Most recently, the casino launched Secret Jungle on June 20th, 2018. As we move into the second half of the year, there is yet another new slot coming to Springbok Casino. The Ancient Gods slot game is a Chinese-themed slot where the gods have mystical powers, and we hope your spins have mystical powers too!

The Ancient Gods slot game is played on five reels with three rows. The gods are both the protectors of the heavens, and of your slot reels. Simply play the game to enhance and capture the power of the gods as you spin the reels, and see if the gods have favored you with a win.

Important symbols to look out for include the Golden Medallion Scatters and the Center Dragon. When these symbols appear, it is possible that they will reveal another two Center Dragons. Any additional Center Dragons will be moved to a different position on the same reel.

The Ancient Gods slot game has a free spins feature in which two free games are awarded when you see the Golden Medallion or Yellow Dragon of Earth symbols on the reels. The Golden Medallions appear in the base game, however, once you have moved over to the free games screen, you will receive additional free spins when the wild Yellow Dragon of Earth symbol appears. If the free spins feature is triggered by four scatter symbols, the prizes double, and if it was triggered by five scatter symbols, the prizes are tripled.

The Springbok Casino Manager, Daniel Van Wyke, commented on the upcoming slot launch. He said: "This is heavenly! With Ancient Gods, the almighty forces are with you, battling in your corner, and pushing you on and on to win riches that are absolutely out of this world. So feel the force, and get ready to be lucky. Come on down to Springbok Casino and play Ancient Gods today."

The past month at Springbok Casino has been an exciting one with the Secret Jungle slot release, and God of Wealth giving players double comp points as the Game of the Month. The Soccer World Cup promotion that offered 25 free spins on the Football Frenzy slot is coming to a close after a great month of slots and soccer. There are more treats coming your way at Springbok Casino next month, starting with the July 4th Ancient Gods slot release!