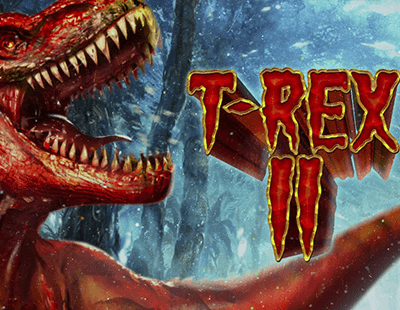 Head back to the Jurassic era and hear the T-Rex roar as he spins on the reels. The new T-Rex II slot launches at Sloto Cash Casino with a special promotional offer. The new slot is the sequel to the original T-Rex slot that was particularly popular with players. So far, the new T-Rex slot looks even better than the original version.

Do you want to try out the new T-Rex II slot game? Get playing with a special match deposit bonus offer plus loads of free spins.

T-Rex II has 25 pay lines and plays out on five reels with three rows. Designed by RTG (Realtime Gaming), this slot is likely to become a huge hit with players. Not only does it have a great theme, it also has excellent special features. The quality graphics appear animated when players hit a win, which already takes the game into another dimension, along with being set in a long-lost era.

Wilds are important features in T-Rex II. In addition to the regular wild symbol, there are T-Rex Terror Wilds. The T-Rex is the regular wild. This symbol only appears on the first reel on the left hand side. When the wild symbol helps create a pay line, the prize comes with a 2x multiplier. When there are other dinosaurs on the reels, the T-Rex Terror Wilds can eat the dinosaurs and replace them. This puts the T-Rex wilds on other reels, making it more likely that there will be a winning combination.

The scatter dinosaur eggs are also important in the T-Rex slot. Three, four, or five scatters trigger 10, 20, or 100 free spins respectively. The T-Rex Terror Wilds feature is also available during the free spins round. In addition to this, the dinosaur scatters also appear during free spins and can retrigger more free games.